“It’s a dangerous business, Frodo, going out your door. You step onto the road, and if you don’t keep your feet, there’s no knowing where you might be swept off to.” ― J.R.R. Tolkien

This is a guide that will show you the route I took to Tolkien’s grave in December 2017. It is intended for people who are not very familiar with the British railway system and who need to get there as fast as possible.

Tolkien’s grave lies in the Wolvercote Cemetery in the city of Oxford. If you are traveling from London, you must first … get to Oxford. There are many options to travel there, but the one I chose was to take the train from Marylebone Station, because it was the closest station to where I lived, and in theory, it looked less complicated to get there than to other stations.

The simple version of the route is:

There may be better or faster ways to get to Wolvercote Cemetery from London, but this one is the one I tried, with the help of Google Maps and with additional confirmation and tips from the members of the English facebook group “The Tolkien Society“! Big thanks to the dozens of people from that group who helped with tips and useful info!

You can buy a ticket in advance, online, from http://www.nationalrail.co.uk/. If you are looking for a cheap one, you should check trains that depart from Marylebone after 9:30. You may find tickets at that time that do not charge the return ticket. From the website of the National Rail, you will most likely be forwarded to the website of Chiltern Railways. This is one of the many Railway companies that operate in London and most of the trains that depart from Marylebone Station belong to that company. It’s quite easy to buy the ticket, which you have to print and have with you when you travel.

GETTING TO MARYLEBONE STATION

That is going to depend on where you live in London, so you have to plan this yourself, via Google Maps and cross check with https://tfl.gov.uk/. It can be a bit tricky to change underground trains to get there. Just make a note of the destination of the train and the name of the station you need to get out to change.

IF YOU NEED TO BUY FLOWERS

There is a store in Marylebone Station with various items and snacks that also sells some bouquets. I tried to find a florist in London at 8 am without success. So either get your flowers on the day before you travel, or from Marylebone Station, once you get there.

This station has an area with shops, offices and monitors (screens) where you can check the platform of your train. The platforms are in a separate area and to enter that area you have to swipe that part of your ticket with the code, on the machines that let people in and out of the platform area. Don’t enter that area too early, and don’t enter that area if you haven’t checked which is the correct platform number for your train. If you arrive as early as half an hour before the scheduled departure, it is better to wait and watch the monitors until the number of your train platform appears on the screen. It may appear 15 or 10 minutes before departure. Once you know exactly which is the number of your platform, only then enter the platform area. There may be different trains traveling to Oxford but some will be from another company and your ticket will not be valid for those trains. The platforms are not very near each other. So you need to get on the right one!

The train itself is very comfortable. Chiltern offers free internet (but you have to register an account to access it) and there are electricity sockets on the tables where you can charge your devices. The train also has some areas that are “silent areas”. People are supposed to sit in there and not talk and disturb others. One can sit wherever one wants, I didn’t notice anyone having booked specific seat numbers.

Oxford Parkway station is a place that is a huge parking area. There are hundreds of cars parked there. The station itself has two platforms that go to opposite directions. The building has WC, a small area where you can sit and wait for your train, a small shop that sells snacks and the information desk. (There may be more shops which I don’t recall anymore). Once you exit the building, you have to turn right and go up the ramp. Google map here shows that you have to go left, but it is not possible to reach the bus station from the left. So turn right and go up the ramp. It takes around one minute to get to the bus stop which is on the top of the ramp! You will notice that this bus stop does not have a letter on it, while Google maps shows a stop with a specific letter. Nevertheless, that is the right stop.

Across the street there is another bus stop, but that is the one where you will arrive when you return from the cemetery. It is not the one that you will take you there. The buses in Oxford accept cash and it is  better to have coins ready, rather than notes. However, I forgot about that completely and had only notes, small ones fortunately! The driver must have noticed how disorientated and uncertain I was and was very polite. So I had a great experience with the buses of Oxford. Most buses go to “Five Mile Drive” but not all, so make sure to check google maps or ask the driver before you buy the ticket.

The bus stop “Five Mile Drive” is only a 2-3 minutes away from Oxford Parkway via bus.  Once you arrive there, you only need to look across the street and you will see Wolvercote Cemetery. It is not even 1 minute walking to reach the entrance. You have to cross the street!

There is a map at the entrance, a pathway to the left and a wide road, presumably for cars,  directly ahead. 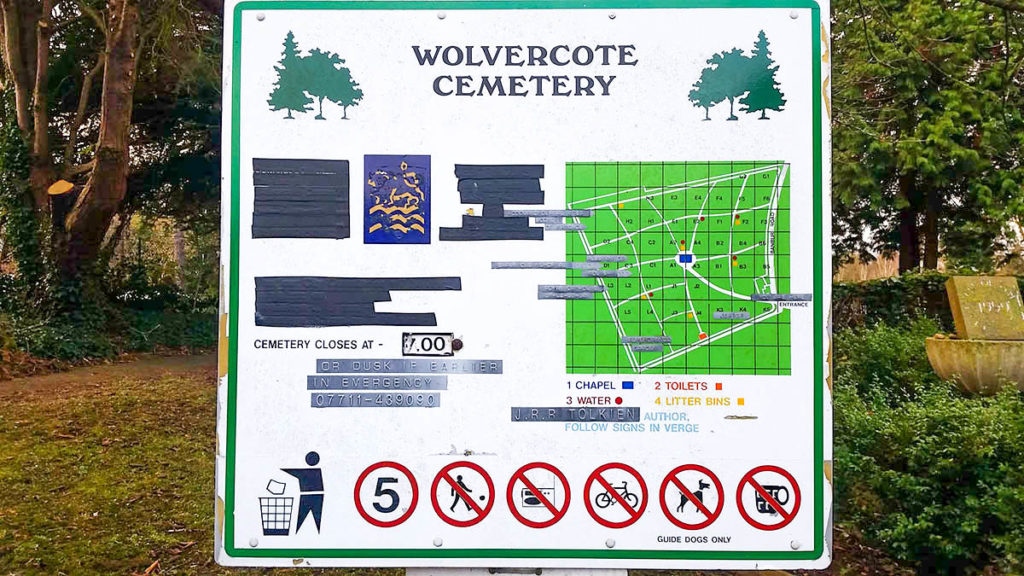 I chose the left pathway and walked through the cemetery. I was impressed and astounded by the beauty and the serenity of the place.

I did not meet any people there, apart from some workers. In the verge, there were few signs that showed the way to Tolkien’s grave. 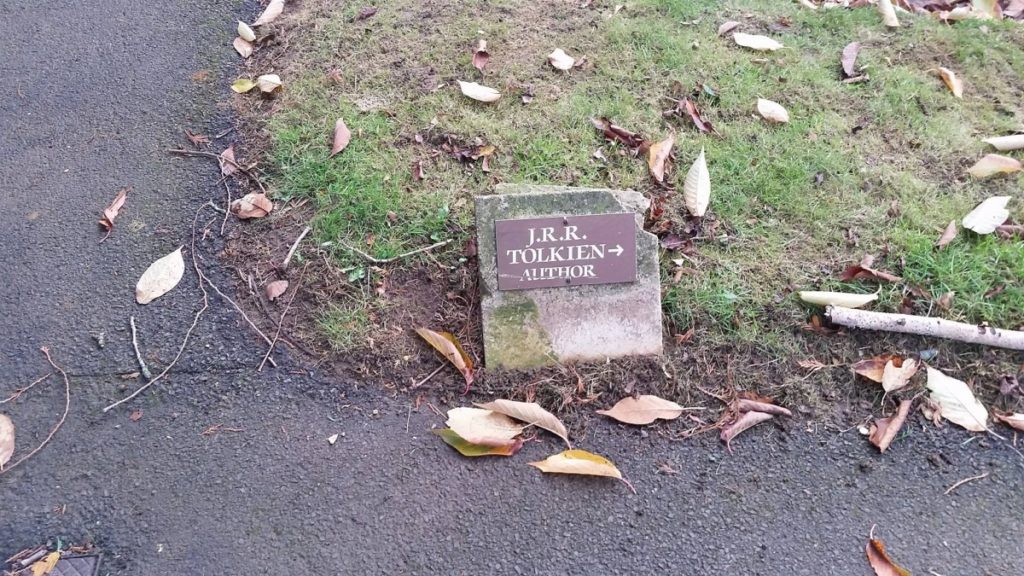 After a few minutes, I found it. 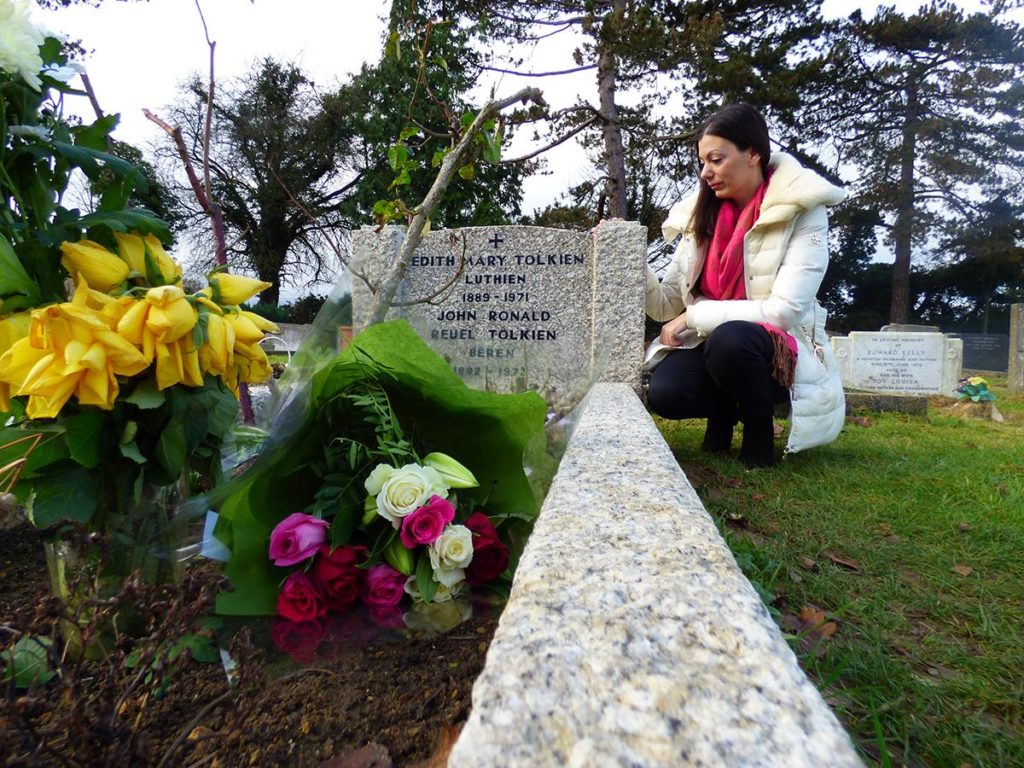 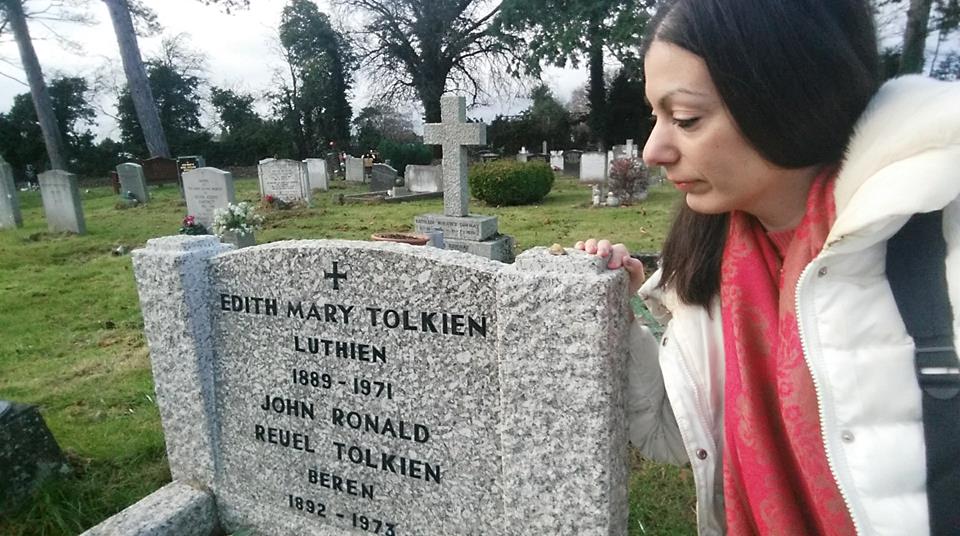 The bus stop is directly outside the cemetery. Once you arrive at Oxford Parkway, you just need to cross the street and go down the ramp, back in the Station.